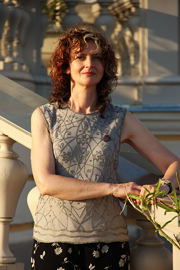 I am Vinita Vitola. By education I am a professional social worker but I work as a social educator in the social care center for physically and mentally dissabled children in Liepaja – a town of Latvia. My first education was connected with applied arts and I always have been interested in how to combine social work with creative activities. When I met Ove Henning Solheim I liked the way how he is working with youngsters. The company DUG not only organising the free time activities for youngsters or emphasizing how good the dancing is for the body but very much stress put on mental growing. Through dancing the youngsters grow as personalities, develop their social competence: cooperation, the ability to communicate well in a group, to increase the self esteem, independence, responsibility and emotional competence. Youngsters become more self-confident, bolder and positively opened.

I met Ove Henning more then 10 years ago – in 2004 in Norway in a project leaders’ seminar. When we met Ove Henning had been in Baltics already a couple years ago – in Lithuania. The dance group of young dancers visited a few towns and in one of them – in Klaipeda they stayed in the orphanage  for several days giving performance and teaching children in dance skils. We decided to orginize a similar project in Latvia. DUG gave a name  to this project – “Colors of  Care”. It symbolises the ability to take care for somebody in many different ways – not only physicaly but also to give a joy,     showing a colorful performance, giving dance clases and involving in new performances, simply being  together. Since that year almost 20 times different dance groups have been in Baltics. The  name of the project was kept as a brand.

Despite in the year 2004 Latvia entered in the content of EU it still was a “post-soviet” country. There were many large institutions for children where children lived until they reached 18 or 24 (depending if the youngster is studing or not). Society had a lot of prejudies and stereotypes, the people carried a reflection of tough burden of history in their serious faces, even if many of them had not lived in Soviet Regime.

99% children in orphanages having at least one living parent and most having some extended family. Their parents just hadn’t been able to take care for their own children. The children with so hard life experience as orphanages’ kids. When dancers stayed in the orphanages, they experienced how these kids need love, tenderness and joy. Due to life in the environment of institution many of children showe obvious psychological, cognitive and behavioral problems. But dancers using very simple language and friendly kind attitude manage to replace that missing loving relationship. Very often both sides had so good emotional contact they could not take leave for hours.

Special story of course is about dancing workshops. Not everywhere and not everyone was participating in dance workshops but outcomes always were very good. Children were happy , they learned a new dance steps and hopefully many were encouraged of those who did not danced before. Very touching scene were those dances, which were made together – Norwegian dancers with local kids. In several orphanages for a long time after Norwegians departure the children and youngsters made their own dance group and were dancing by themselves. Workshops were organised also in schools and youth clubs. Latvian youngsters always told how they appriciate the way of dance teaching – the peer education. It is something totaly different  from our youngsters have experienced.

I do hope that Norwegians also got a valuable experience from these projects, discovered a new culture and friends, developed new competences. Even sometimes something does not go absolutely smooth and perfect but that is life – we have to accept every experience.

During the last decade our social system in Latvia and Lithuania has been changed. The process of deinstucionalisation has started. Many of orphanages  are slowly being phased out in favour of direct support to vulnerable families and the development of foster care and adoption services where this is not possible. Instead of large institutions must be created smaler size family type centers.

We do not know how long these project will be able, at least in the manner like it was. But probably we have to transform the projects in other type.